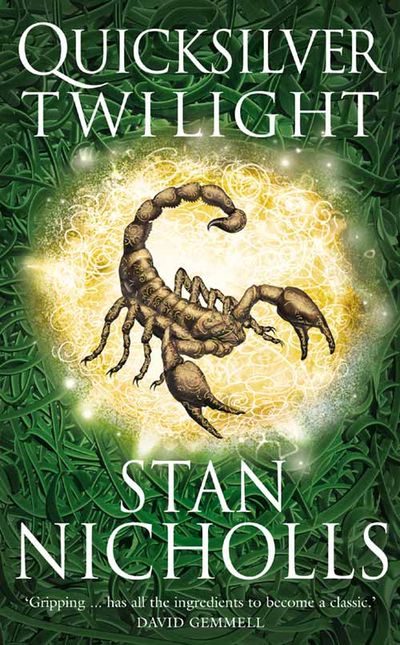 Final volume in the powerful new fantasy adventure from Stan Nicholls, the British author of the internationally acclaimed Orcs series.

Desperate to find a cure for the curse of immortality and the episodes of berserk fury and debilitating visions that plague him, Reeth Caldason has traded his fighting skills for the promise of access to powerful ancient magic. But the Resistance group he reluctantly joined as part of the bargain is in disarray since their plans to found an island utopia free from tyranny were betrayed by one of their own.

Now, Reeth is trapped on the Diamond Isle, fending off the pirates that plague the surrounding waters. Despite his romantic entanglement with one of the freedom fighters, Serrah, and the responsibility he feels towards Kutch, a young magician’s apprentice, he is determined to set off on the search for his cure. But as his visions grow stranger, Serrah and Kutch begin to understand his true nature and the great power it represents.

Back on the mainland, Reeth’s arch-enemy, Devlor Bastorran, remains intent on destroying him. Overshadowing everything is the threat of Zerreiss, the conquering barbarian warlord who uses an enigmatic ability to sweep all before him. The spectre of war looms.

Author: Stan Nicholls
Format: Paperback
Release Date: 04/06/2007
Pages: 448
Print on Demand: No stock held, printed to order.
ISBN: 978-0-00-714154-8
Stan Nicholls has been a full-time writer since 1981. He is the author of many novels and short stories but is best-known for the internationally acclaimed Orcs: First Blood series. His journalism has appeared in the Guardian, the Independent, the Daily Mirror, Time Out, Sight and Sound, Rolling Stone, SFX and Locus among many others. Stan has worked for a number of specialist and general bookshops and was the first manager of the London branch of Forbidden Planet. He lives in the West Midlands with his wife, Anne Gay.

Final volume in the powerful new fantasy adventure from Stan Nicholls, the British author of the internationally acclaimed Orcs series.