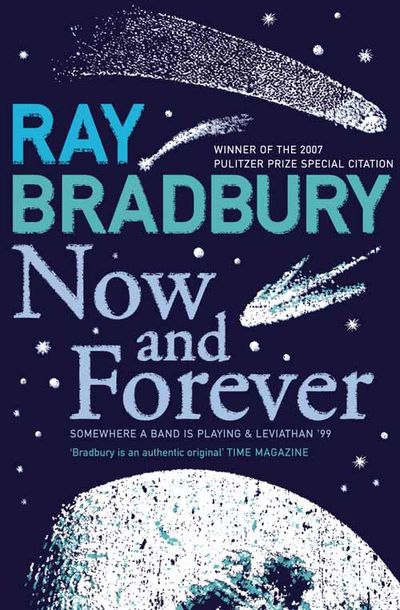 Two dazzling new novellas from the celebrated author of Fahrenheit 451.

Two previously unpublished novellas comprise this astonishing new volume from one of science fiction’s greatest living writers. In the first, ‘Somewhere a Band is Playing’, newsman James Cardiff is lured through poetry and his fascination with a beautiful and enigmatic young woman to Summerton, Arizona. The small town’s childless population hold an extraordinary secret which has been passed on for thousands of years unbeknownst to the rest of human civilization.

In the second novella, ‘Leviathan ’99’, the classic tale of Herman Melville’s ‘Moby Dick’ is reborn as an interstellar adventure. It recounts the exploits of the mad Captain Ahab, who, blinded by his first encounter with a gigantic comet called ‘Leviathan’, pursues his lunatic vendetta across the universe. Born in space and seeking adventure in the skies, astronaut Ishmael Jones joins the crew aboard the Cetus 7 and quickly finds his fate in the hands of an indefatigable captain.

Published together for the first time in one volume, these two stories twinkle with Bradbury’s characteristically intricate metaphors and lyrical phrases. Both are a lasting testament to an older generation of writers that, much like the Leviathan itself, are on the threshold of passing on into the realm of legend.

Author: Ray Bradbury
Format: Paperback
Release Date: 04/08/2008
Pages: 240
ISBN: 978-0-00-728473-3
One of the greatest science fiction and fantasy writers of all time, Ray Bradbury was born in Waukegan, Illinois, in 1920. He moved with his family to Los Angeles in 1934. Since his first story appeared in Weird Tales when he was twenty years old, he published some 500 short stories, novels, plays, scripts and poems. Among his many famous works are Fahrenheit 451, The Illustrated Man and The Martian Chronicles. Ray Bradbury died in 2012 at the age of 91.

Two dazzling new novellas from the celebrated author of Fahrenheit 451.