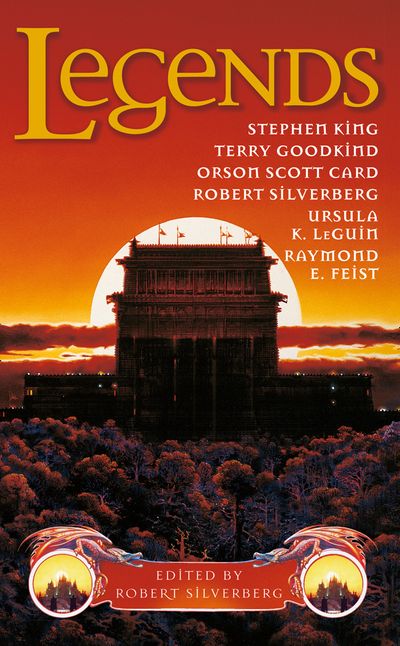 Rich new works by the very best-known creators of fantasy fiction, each set in the special universe of the imagination that made that writer famous throughout the world.

Stephen King: The Dark Tower: THE LITTLE SISTERS OF ELURIA: Dark fantasy and icy realism, a visionary mix of magic and horror.Terry Goodkind: The Sword of Truth: DEBT OF BONES: Green fire and black magic rage between the First Wizard and Panis Rahl.Orson Scott Card: The Tales of Alvin Maker: GRINNING MAN: A step closer to the ultimate confrontation between Alvin and the Unmaker.Robert Silverberg: Majipoor: THE SEVENTH SHRINE: In the time of the most famous Pontifex of all, Lord Valentine.Ursula K. LeGuin: Earthsea: DRAGONFLY: A woman for the first time on the mage’s Isle of Roke.Raymond E. Feist: The Riftwar Saga: THE WOOD BOY: When the Kingdom had just been invaded by the Tsurani.Terry Pratchett: Discworld: THE SEA AND LITTLE FISHES: Fruit, vegetables and deadly rivalry between witches.Anne McCaffrey: Pern: RUNNER OF PERN: A young Runner on her first journey, dreaming of dragons and glory.George R.R. Martin: A Song of Ice and Fire: THE HEDGE KNIGHT: A self-made knight, his honour, his horse, his squire, his luck.Tad Williams: Memory, Sorrow and Thorn: THE BURNING MAN: Dragon’s blood and ancient hatreds on the Road of Dreams.Robert Jordan: Wheel of Time: NEW SPRING: Storm and battle in the shadow of the Blight… as the wheel turns.

Author: Edited by Robert Silverberg
Format: Paperback
Release Date: 04/07/2011
Pages: 762
Print on Demand: No stock held, printed to order.
ISBN: 978-0-00-744731-2
Robert Silverberg was born in New York in 1935. He has been nominated for more awards for his fiction than any other science fiction writer, alive or dead. He and his wife now live in San Francisco.

Rich new works by the very best-known creators of fantasy fiction, each set in the special universe of the imagination that made that writer famous throughout the world.