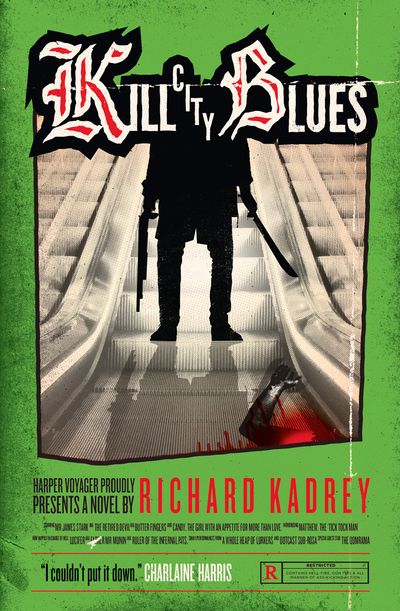 A smart, kick-arse Urban Fantasy from a new master of the genre. Kill City Blues is the fifth book in the fantastic Sandman Slim series.

James Stark, aka Sandman Slim, has managed to get out of Hell – again – renounce his title as the new Lucifer, and settle back into life in LA. But he’s not out of trouble yet. Somewhere along the way he misplaced a weapon from the banished older gods who now want it back.

The hunt leads Stark to an abandoned shopping mall — a multi-storey copy of LA — infested with Lurkers and bottom-feeding Sub Rosa families, squatters who have formed tight tribes to guard their tiny patches of territory. Somewhere in the kill zone of the former mall is a dead man with the answers Stark needs.

All Stark has to do is find the dead man, get back out alive, and outrun some angry old gods — with a few killers on his tail.

Author: Richard Kadrey
Format: Other Format
Release Date: 01/08/2013
ISBN: 978-0-00-748387-7
Richard Kadrey is the New York Times bestselling author of the Sandman Slim supernatural noir books. Sandman Slim was included in Amazon’s ‘100 Science Fiction & Fantasy Books to Read in a Lifetime’, and is in development as a feature film. His other books include Hollywood Dead, The Everything Box, Metrophage, and Butcher Bird, and he also writes comics and screenplays. He lives in San Francisco.

A smart, kick-arse Urban Fantasy from a new master of the genre. Kill City Blues is the fifth book in the fantastic Sandman Slim series.