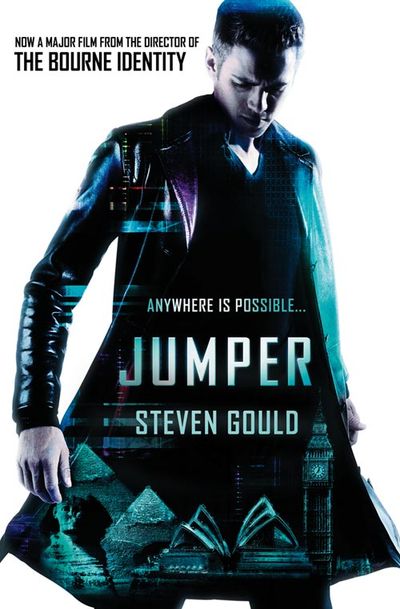 Written in the 1990s by American author Steven Gould, Jumper tells the story of Davy Rice as he escapes his tortured childhood to explore the world via teleportation and find his long lost mother.

At seventeen the world is at your feet… especially if you can teleport.

David Rice barely remembers his mother. She left his alcoholic father when Davy was very young. She left Davy too, and since then all of William Rice’s abusive anger has been focused on his young teenage son.

One evening, as he is about to receive another brutal beating, Davy shuts his eyes and wishes to be safe. When he opens them again, he finds himself in his small town’s library. Slowly, he realises he is very special, he can teleport.

Armed with his new power, Davy sets out with new purpose: he will leave his abusive home and find his long lost mother. Davy’s confidence grows as his skills do, but they also draw unwanted attention and soon Davy finds that he too is hunted.

Author: Steven Gould
Format: Paperback
Release Date: 04/02/2008
Pages: 352
Print on Demand: No stock held, printed to order.
ISBN: 978-0-00-727599-1
Detailed Edition: Film tie-in edition
Steven Gould is the author of Jumper, Wildside, Helm, Blind Waves, Reflex, and Jumper: Griffin’s Story, as well as several short stories. He is the recipient of the Hal Clement Young Adult Award for Science Fiction and has been on the Hugo ballot twice and the Nebula ballot once for his short fiction. Steve lives in New Mexico with his wife, writer Laura J. Mixon and their two daughters. As he is somewhere between Birth and Death, he considers himself to be middle-aged.

Written in the 1990s by American author Steven Gould, Jumper tells the story of Davy Rice as he escapes his tortured childhood to explore the world via teleportation and find his long lost mother.