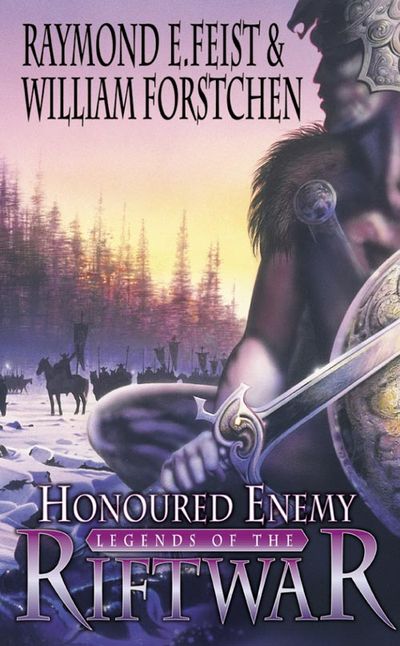 Freedom at any price?

Hartraft’s Marauders, a crack band of Kingdom raiders, are a special unit designed to infiltrate and fight behind enemy lines. They are currently heading for a frontier garrison, after a disastrous encounter with the Tsurani.

Meanwhile, a Tsurani patrol is sent to support an assault on the same garrison. Both sides arrive at the same time and discover the garrison has been overrun by a migrating horde of moredhel (dark elves), and they are forced by circumstances to band together and fight as one unit to survive.

The only problem is, who do they hate the most – their mutual enemy, or each other? As they make their way across the unknown Northlands to freedom, they have to struggle not only with the elements and their enemies, but also their conscience. For what is more important – one’s life or one’s honour?

Honoured Enemy is the first book in the Legends of the Riftwar series. It is the first of three co-authored books that return to the world of Feist’s best-loved series.

Author: Raymond E. Feist and William Forstchen
Format: Other Format
Release Date: 13/09/2012
ISBN: 978-0-00-738140-1
Feist is now firmly established as one of the world’s leading fantasy writers. His Riftwar and Serpentwar Sagas have been global bestsellers for years.Raymond E. Feist was born and raised in Southern California. He was educated at the University of California, San Diego, where he graduated with honours in Communication Arts. He is the author of the bestselling and critically acclaimed Riftwar Saga (Magician, Silverthorn, and A Darkness at Sethanon), Prince of the Blood, Faerie Tale and The King's Buccaneer. He is co-author (with Janny Wurts) of Daughter of the Empire, Servant of the Empire and Mistress of the Empire.The Serpent War Saga (Shadow of a Dark Queen, Rise of a Merchant Prince, Rage of a Demon King and Shards of a Broken Crown) has continued his phenomenal success, and his epic new Riftwar series includes bestsellers Krondor: The Betrayal, Krondor: The Assassins and Krondor: Tear of the Gods.