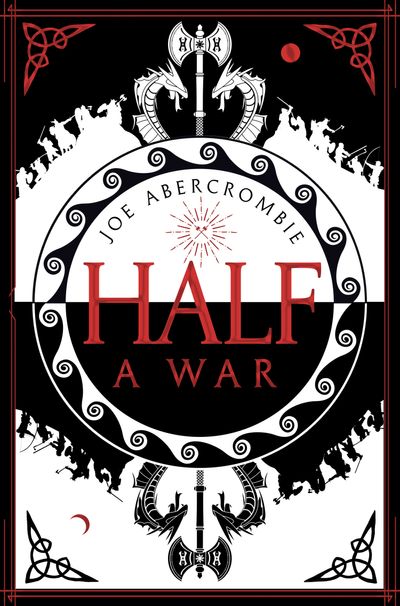 Princess Skara has seen all she loved turned to ashes. She is left with only words. But the right words can be as deadly as any blade.

ONLY HALF A WAR IS FOUGHT WITH SWORDS

The deep-cunning Father Yarvi has walked a long road from crippled slave to king’s minister. But now he faces the greatest army since the elves made war on God.

SOMETIMES ONE MUST FIGHT EVIL WITH EVIL

Some – like Thorn Bathu and the sword-bearer Raith – are born to fight, perhaps to die. Others – like Brand the smith and Koll the wood-carver – would rather stand in the light. But when Mother War spreads her iron wings, she may cast the whole Shattered Sea into darkness…

Author: Joe Abercrombie
Format: Paperback
Release Date: 10/03/2016
Pages: 512
ISBN: 978-0-00-755028-9
Joe Abercrombie was born in Lancaster on the last day of 1974, the son of an English teacher and a sociologist. He spent much of his youth in imaginary worlds, and left school with a good idea of how to make stuff up. He moved to the big city, learned to brew tea, and ended up as a TV editor, working on documentaries, events and concerts for bands from Iron Maiden to Coldplay. But in the darkness of the night he was still making stuff up, and his first book, The Blade Itself, was published in 2006. He now lives in Bath with his wife Lou and their three children Grace, Eve and Teddy and makes stuff up full-time.