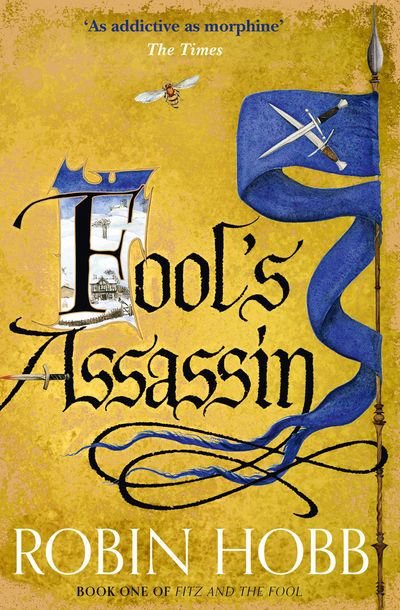 Robin Hobb returns to her best loved characters in a brand new series.

Tom Badgerlock has been living peaceably in the manor house at Withywoods with his beloved wife Molly these many years, the estate a reward to his family for loyal service to the crown.

But behind the facade of respectable middle-age lies a turbulent and violent past. For Tom Badgerlock is actually FitzChivalry Farseer, bastard scion of the Farseer line, convicted user of Beast-magic, and assassin. A man who has risked much for his king and lost more…

On a shelf in his den sits a triptych carved in memory stone of a man, a wolf and a fool. Once, these three were inseparable friends: Fitz, Nighteyes and the Fool. But one is long dead, and one long-missing.

Then one Winterfest night a messenger arrives to seek out Fitz, but mysteriously disappears, leaving nothing but a blood-trail. What was the message? Who was the sender? And what has happened to the messenger?

Suddenly Fitz’s violent old life erupts into the peace of his new world, and nothing and no one is safe.

Author: Robin Hobb
Format: Other Format
Release Date: 12/08/2014
ISBN: 978-0-00-744418-2
Robin Hobb is one of the world’s finest writers of epic fiction.She was born in California in 1952 but raised in Alaska, where she learned how to raise a wolf cub, to skin a moose and to survive in the wilderness. When she married a fisherman who fished herring and the Kodiak salmon-run for half the year, these skills would stand her in good stead. She raised her family, ran a smallholding, delivered post to her remote community, all at the same time as writing stories and novels. She succeeded on all fronts, raising four children and becoming an internationally best-selling writer. She lives in Tacoma, Washington State.

Robin Hobb returns to her best loved characters in a brand new series.