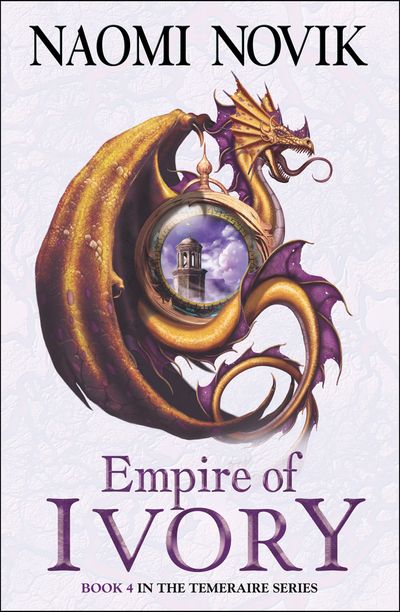 Naomi Novik’s stunning series of novels follow the adventures of Captain William Laurence and his fighting dragon Temeraire as they travel from the shores of Britain to China and Africa.

Laurence and Temeraire made a daring journey across vast and inhospitable continents to bring home a rare Turkish dragon from the treacherous Ottoman Empire.

Kazilik dragons are firebreathers, and Britain is in greater need of protection than ever, for while Laurence and Temeraire were away, an epidemic struck British shores and is killing off her greatest defence – her dragon air force is slowly dying.

The dreadful truth must be kept from Napoleon at all costs. Allied with the white Chinese dragon, Lien, he would not hestitate to take advantage of Britain’s weakness and launch a devasting invasion.

Hope lies with the only remaining healthy dragon – Temeraire cannot stay at home, but must once again venture into the unknown to help his friends and seek out a cure in darkest Africa.

Author: Naomi Novik
Format: Paperback
Release Date: 03/03/2008
Pages: 400
ISBN: 978-0-00-725674-7
Naomi Novik was born in New York in 1973, a first-generation American, and raised on Polish fairy tales, Baba Yaga, and Tolkien. She studied English Literature at Brown University and Computer Science at Columbia University before leaving to work in the games industry. Over the course of a brief winter sojourn working on a game in Canada, she realized she preferred the writing to the programming, and, on returning to New York, decided to try her hand at novels. Temeraire is her first.

Naomi Novik’s stunning series of novels follow the adventures of Captain William Laurence and his fighting dragon Temeraire as they travel from the shores of Britain to China and Africa.