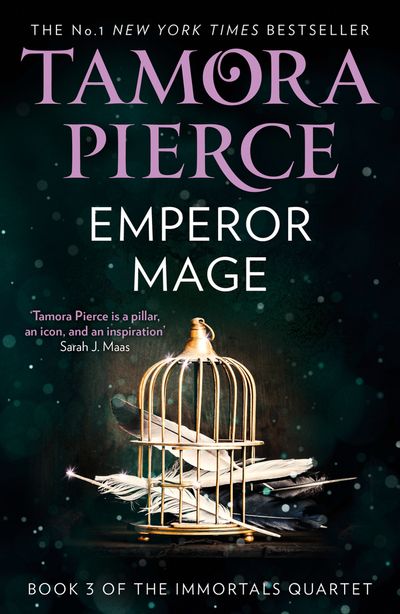 Discover a land of enchantment, legend, and adventure in this third book of The Immortals series, featuring an updated package – perfect for longtime fans and newcomers alike.

Daine Sarrasri’s power is growing, and her bond with animals is ever stronger.

Along with her mentor, Numair, and a delegation from Tortall, Daine is sent to the Emperor Mage of Carthak in hopes that she can help to smooth international relations between their lands before discord bubbles over into war – by helping the emperor’s ailing birds.

But Carthak’s emperor Ozorne is charmingly treacherous, and Carthak itself built on the labour and suffering of slaves. No matter her choices, Daine finds herself at the centre of a terrible crossroads: she cannot turn away from animals in need, but to help this man could place those she loves in the greatest danger and make a mockery of all she values.

All the while, her magic is flourishing, leading her to answers and abilities beyond what she ever could have dreamed … but also to incredible danger.

Discover a land of enchantment, legend, and adventure in this third book of The Immortals series, featuring an updated cover for longtime fans and newcomers alike.

Author: Tamora Pierce
Format: Paperback
Release Date: 18/10/2018
Pages: 256
ISBN: 978-0-00-830413-3
Tamora Pierce is the New York Times bestselling author of the The Song of the Lioness series, The Numair Chronicles, The Immortals series and The Protector of the Small quartet.Pierce was born in South Connellsville, Pennsylvania and her parents were originally going to call her ‘Tamara’, but the nurse who filled out her birth certificate had never heard of that name before and accidentally misspelled it.A passionate reader from an early age, devouring encyclopaedias, Dr Seuss books and J.R.R. Tolkien, writing helped Pierce get through her parents’ divorce. In her junior year at college, she sold her first story and went on to publish The Song of the Lioness in 1983: changing the landscape of fantasy fiction forever. An award-winning, multiple New York Times bestselling author whose books have been published all over the world, Pierce lives in New York with her husband.

Discover a land of enchantment, legend, and adventure in this third book of The Immortals series, featuring an updated package – perfect for longtime fans and newcomers alike.