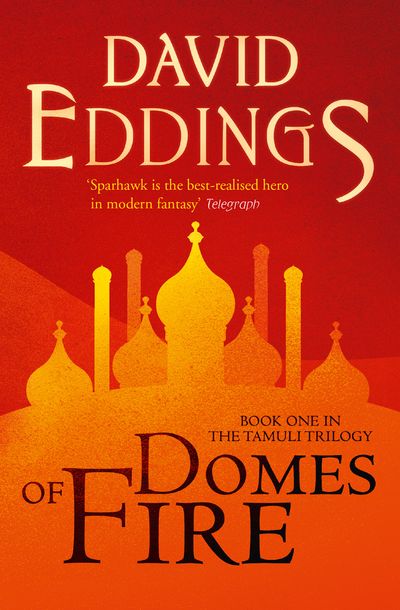 Here begins a David Eddings trilogy, set a few years after the events of The Elenium…

At the conclusion of The Elenium the company of Pandion Knights led by Sir Sparhawk, having freed Queen Ehlana of Elenia from the spell which threatened her life, had marched on Zemoch, routed their enemies and defeated or destroyed the evil god Azash. Sparhawk returned to Elenia, where he and Ehlana were married.

But their peaceful reign is destined not to last long. A few years later, in the Tamul Empire far to the east, unrest is brewing which threatens the nation’s stability. Investigations show that the trouble is clearly of paranormal origin, and suspicion at first falls upon the Styrics. These suspicions prove unfounded, and indeed it is the pre-eminent Styric magician Zalasta who suggests that the Empire look westwards for assistance in solving their problems… specifically, to the legendary warrior Sparhawk.

Author: David Eddings
Format: Other Format
Release Date: 25/03/2010
ISBN: 978-0-00-736803-7
Born in Washington State in 1931, David Eddings grew up near Seattle. He graduated from the University of Washington and went on to serve in the US Army. Subsequently he worked as a buyer for the Boeing company and taught college-level English. His first novel was a contemporary adventure, but he soon began a spectacular career as a fantasy writer with his series The Belgariad. He consolidated his success with two further popular series, The Malloreon and The Elenium.

Here begins a David Eddings trilogy, set a few years after the events of The Elenium…