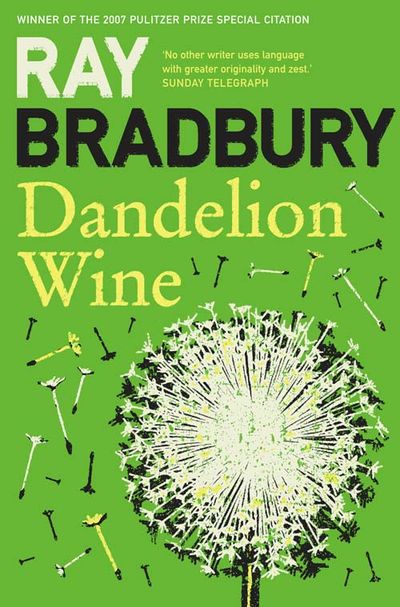 An endearing classic of childhood memories of an idyllic midwestern summer from the celebrated author of ‘Farenheit 451’.

“He stood at the open window in the dark, took a deep breath and exhaled.

The street lights, like candles on a black cake, went out.

Douglas smiled. He pointed a finger.

There, and there. Now over here, and here…

Yellow squares were cut in the dim morning earth as house lights winked slowly on. A sprinkle of windows came suddenly alight miles off in dawn country.

‘Everyone yawn. Everyone up.'”

In the backwaters of Illinois, Douglas Spaulding’s grandfather makes an intoxicating brew from harvested dandelions. ‘Dandelion Wine’ is a quirky, breathtaking coming-of-age story from one of science fiction’s greatest writers. Distilling his experiences into “Rites & Ceremonies” and “Discoveries & Revelations”, the young Spaulding wistfully ponders over magical tennis shoes, and machines for every purpose from time travel to happiness and silent travel.

Based upon Bradbury’s own experiences growing up in Waukegan in the 1920s, ‘Dandelion Wine’ is a heady mixture of fond memory, forgiveness, magic, the imagination and above all, of summers that seemed to go on forever.

Author: Ray Bradbury
Format: Paperback
Release Date: 01/12/2008
Pages: 336
ISBN: 978-0-00-728474-0
One of the greatest science fiction and fantasy writers of all time, Ray Bradbury was born in Waukegan, Illinois, in 1920. He moved with his family to Los Angeles in 1934. Since his first story appeared in Weird Tales when he was twenty years old, he published some 500 short stories, novels, plays, scripts and poems. Among his many famous works are Fahrenheit 451, The Illustrated Man and The Martian Chronicles. Ray Bradbury died in 2012 at the age of 91.

An endearing classic of childhood memories of an idyllic midwestern summer from the celebrated author of ‘Farenheit 451’.