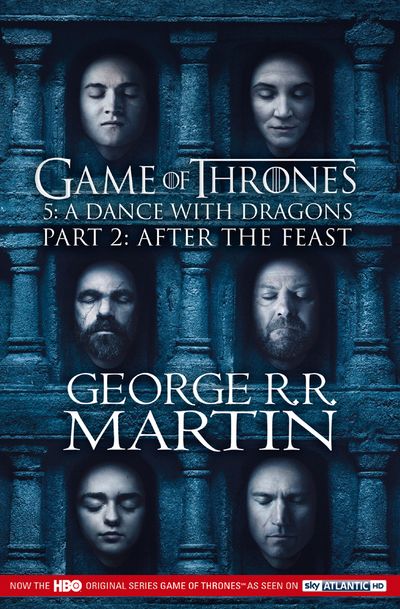 Dance with Dragons: Part 2 After the Feast

HBO’s hit series A GAME OF THRONES is based on George R.R. Martin’s internationally bestselling series A SONG OF ICE AND FIRE, the greatest fantasy epic of the modern age.

Beyond the Wall, Jon Snow’s Night’s Watch is riven by treachery, enemies both mortal and supernatural are massing, while in the North the combatants at Winterfell are engulfed by the worst winter snows ever seen. In King’s Landing Cersei Lannister finds herself abandoned by everyone she trusts. Her brother Tyrion, having fled a death sentence, is making his way ever east towards Meereen, where Daenerys Targaryen struggles to rule a city full of death.

The rise of Daenerys is known to many in Westeros now. From the Iron Islands and Dorne, Oldtown and the Free Cities, emissaries are converging to join her cause or to use her, and her dragons, for their own ends.

The future of the Seven Kingdoms hangs in the balance. The great dance is beginning…

Dance with Dragons: Part 2 After the Feast

HBO’s hit series A GAME OF THRONES is based on George R.R. Martin’s internationally bestselling series A SONG OF ICE AND FIRE, the greatest fantasy epic of the modern age.