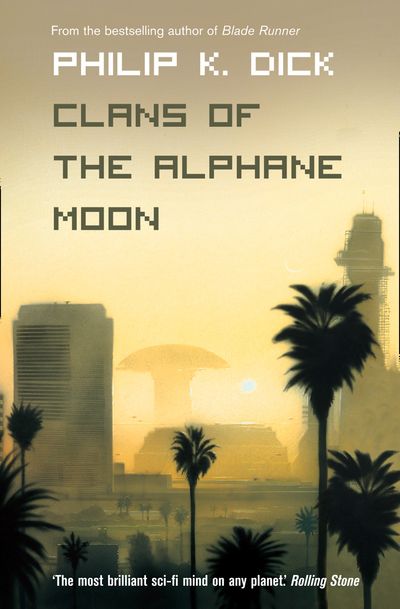 Clans of the Alphane Moon

No man in their rightful mind would kill their wife miles from home.

Chuck Rittersdorf has recruited some robot help, and now, in the madness and dysfunction of the Alphane moon, there seems no better place to carry out his cruel plans unless he too is part of a much larger conspiracy.

Alpha Centauri, a star within the closest star system to earth, has several orbiting moons, among which is Alpha III M2. On this remote moon, a colony, originally set up to provide respite for the mentally ill is about to become the focus of a secret invasion plan.

Among them is Chuck Rittersdorf, a 21st century CIA robot programmer, who has decided to kill his own wife via a remote control simulacrum. He enlists the aid of a telepathic Ganymedean slime mould called Lord Running Clam, an attractive female police officer and various others both witting and unwitting.

But when Chuck finds himself in the midst of an interplanetary spy ring on the Alphane moon inhabited entirely by certified maniacs, his personal revenge plans begin to awry as the nature of reality itself is called into question in this brilliantly inventive tale of interstellar madness, murder and violence.

Author: Philip K. Dick
Format: Paperback
Release Date: 10/12/2010
Pages: 208
Print on Demand: No stock held, printed to order.
ISBN: 978-0-00-648248-2
Philip K Dick was born in Chicago in 1928 and lived most of his life in California. He attended college for a year at Berkeley. Apart from writing, his main interest was music. He won the Hugo Award for his classic novel of alternative history, The Man in the High Castle (1962). He was married five times and had three children. He died in March 1982.

Clans of the Alphane Moon

No man in their rightful mind would kill their wife miles from home.

Chuck Rittersdorf has recruited some robot help, and now, in the madness and dysfunction of the Alphane moon, there seems no better place to carry out his cruel plans unless he too is part of a much larger conspiracy.