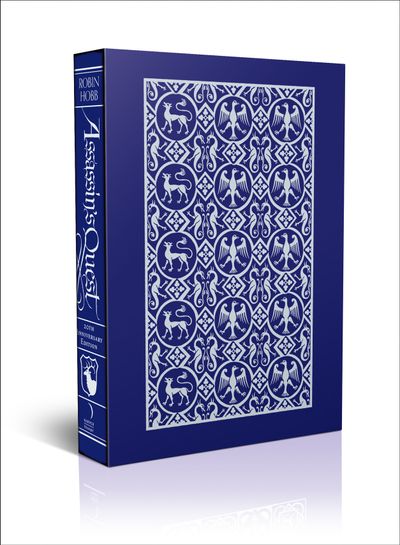 With the king no longer living and the heir, Verity, missing and declared dead, Prince Regal has treacherously seized the throne.

Regal’s torture has left Fitz more dead than alive, and more closely than ever bonded with his wolf. All who once loved him believe him dead: even Molly, now pregnant with his child. But he cannot go to her without placing her in terrible danger.

With nothing to lose, Fitz sets out for Tradeford, where Regal has withdrawn, having heartlessly abandoned the north of the kingdom to the Red-Ship Raiders. His quest: to assassinate the man who has destroyed his world.

Author: Robin Hobb
Format: Hardback
Release Date: 02/11/2017
Pages: 656
ISBN: 978-0-00-822328-1
Detailed Edition: Anniversary edition
Robin Hobb is one of the world’s finest writers of epic fiction.She was born in California in 1952 but raised in Alaska, where she learned how to raise a wolf cub, to skin a moose and to survive in the wilderness. When she married a fisherman who fished herring and the Kodiak salmon-run for half the year, these skills would stand her in good stead. She raised her family, ran a smallholding, delivered post to her remote community, all at the same time as writing stories and novels. She succeeded on all fronts, raising four children and becoming an internationally best-selling writer. She lives in Tacoma, Washington State.