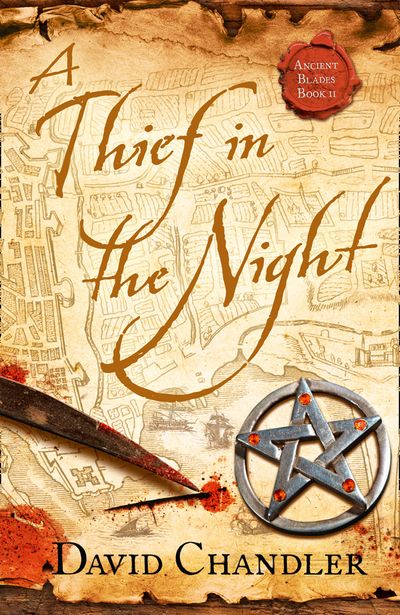 A Thief in the Night

It takes a thief to destroy a demon…

Circumstance made him a criminal.Destiny may make him a hero.

As a thief, Malden is unparalleled in the Free City of Ness. But he has no desire to take up arms against the forces of horrific evil. By saving the life of the knight Croy, however, Malden has bound himself to an ancient, noble brotherhood…and he now possesses a magical weapon forged at the dawn of time – one of only seven swords capable of destroying demons.

Malden fears accompanying Croy and the barbarian Mörget on their quest to dispatch a foul creature of nightmare…nor does he want to disturb the vengeful dead. But with an assassin on his heels, the young cutpurse is left with no choice but to follow. And there is the comely sorceress, Cythera, to consider – promised to Croy but in love with Malden – not to mention the fabulous treasure rumoured to be waiting in the inescapable depths of the demon’s lair…

Author: David Chandler
Format: Paperback
Release Date: 04/08/2011
Pages: 400
ISBN: 978-0-00-738416-7
David Chandler was born in Pittsburgh, Pennsylvania. He attended Syracuse University and received an MFA in creative writing from Penn State. He also holds a masters degree in Library Science from the Pratt Institute. He now lives in New York City with his wife who, in her wedding vows, promised to "kick serious zombie ass" for him.

A Thief in the Night

It takes a thief to destroy a demon…