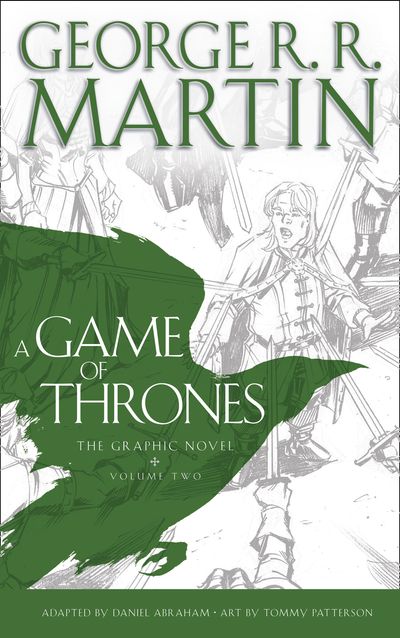 George R. R. Martin’s epic fantasy masterwork A Game of Thrones is brought to life in the pages of this full-colour graphic novel. This is the second volume in what is sure to be one of the most coveted collaborations of the year.

Novelist Daniel Abraham and illustrator Tommy Patterson are not merely turning George R. R. Martin’s epic fantasy A Game of Thrones into a graphic novel: They are meticulously translating one art form into another, and capturing the intricate nuances of Martin’s novels just as HBO is doing with the blockbuster series. The Abraham/Patterson collaboration is more than just a faithful adaptation. It is a labor of love—and a thrilling masterwork in its own right.

Now, in the second volume, the sweeping action moves from the icy north, where the bastard Jon Snow seeks to carve out a place for himself among bitter outcasts and hardened criminals sworn to service upon the Wall . . . to the decadent south and the capital city of King’s Landing, where Jon’s father, Lord Eddard Stark, serves as the Hand of King Robert Baratheon amid a nest of courtly vipers . . . to the barbarian lands across the Narrow Sea, where the young princess Daenerys Targaryen has found the unexpected in her forced marriage to the Dothraki warlord Khal Drogo: love—and with it, for the first time in her life, power.

Meanwhile, the dwarf Tyrion Lannister, accused by Lady Catelyn Stark of the attempted murder of her now-crippled youngest son, must call upon all his cunning and wit to survive when he is captured and imprisoned in the lofty dungeons of the Eyrie, where Lady Stark’s sister—a woman obsessed with vengeance against all Lannisters—rules. But Catelyn’s impulsive arrest of the Imp will set in motion a series of violent events whose outcome is fated to shake the world at the worst possible moment. For now is not the time for private feuds and bloodthirsty ambitions.

Winter is coming . . . and with it, terrors beyond imagining.

George R. R. Martin’s epic fantasy masterwork A Game of Thrones is brought to life in the pages of this full-colour graphic novel. This is the second volume in what is sure to be one of the most coveted collaborations of the year.