Guest Post: Graeme K. Talboys on The Archaeology of Writing

Our wonderful author Graeme K. Talboys’ paperback of STEALING INTO WINTER is available now and he’s written a guest blog for us on how he approaches writing. With a tale about a world built on top of the ruins of a mysterious ancient society, it’s fitting that archaeology plays a vital part in the writing of his Shadow in the Storm series… 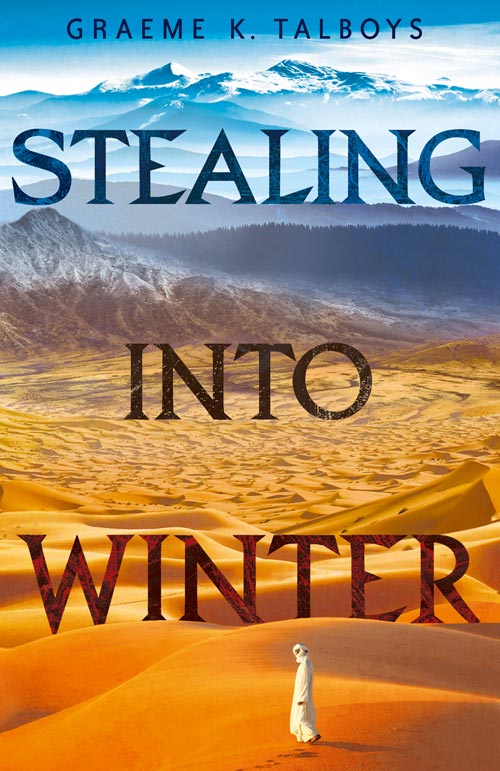 In common with many stories, the Shadow in the Storm sequence (which starts with Stealing into Winter) began a long time ago with very different characters in a story that evolved into Exile and Pilgrim (the forthcoming second book). Stories are like that, especially if you cannot immediately find the correct perspective from which to tell them. They haunt you like vivid dreams that, when you recall them, are full of potential but make no sense.

In common with many writers, I do not ditch story ideas that I cannot resolve. I used to keep them on bits of paper in shoe boxes. Now they go into one of many files I keep on the computer in a folder titled ‘Possibles’. Every now and then, I read through these, add notes, see if things can be resolved a bit more, consider whether certain characters belong in a different story, and so on.

It’s a pleasant way to spend a day – mug of coffee, good music, and a stroll through old ideas with a bit of tidying and tinkering thrown in for good measure. Sometimes, though, it becomes something else.

All the elements, bar one, were there for Shadow in the Storm, just not gathered together in the same file. Characters, situations, events… all parts of a puzzle mixed in with other puzzles, just waiting for something that would allow me to pick them out and put them together. And that key was archaeology.

It may seem odd that archaeology was the key to unlocking the door on this story – it is, after all, set in the distant future. However, there are a number of ways in which archaeology is relevant. In the most obvious instance, the world of the story is littered with ancient artefacts which are of significance to the tale. They are evidence of an ancient cataclysm and its ongoing repercussions.

There are, however, more subtle and largely hidden ways in which archaeology as a discipline is relevant to the writing of the books. To begin with, it is a useful way of storytelling. There are various ways of finding out what lies beneath the surface, of revealing your narrative. Geomagnetic surveys offer a broad picture, an outline. Lidar shows up surface features in detail, offering richer description. If you want detail, though, you need a shovel and trowel and you need to get down on your hands and knees to scrape away, layer by layer, revealing significant features and the context in which they reside. To do this and reveal all the elements of your story, you need to discard a great deal of material and make careful and plausible links between what has been revealed. If you don’t clear enough spoil, the story remains obscured, buried beneath irrelevancies.

A similar process exists with world-building, not so much in the actual building as in the way the new world you have created is revealed to the reader. Tempting as it is to share every last detail of the world you have created (something you may have spent a great deal of time over), I prefer a ‘less is more’ approach. Uncovering that world detail by detail and making subtle links that build up a picture as you go is, I believe, a much more satisfying voyage of discovery. Not only does it avoid awkward info dumps, it treats readers with respect. They are intelligent and enjoy participating in a story, in this case by gathering the clues you present and considering their own theories about how and why the world has taken the form it currently has.

There are, of course, other approaches and other analogues for the process. My background in museums has undoubtedly influenced my approach, just as I also bring elements of theatre to my storytelling from my drama and theatre arts background. In the case of Shadow in the Storm it is an approach that I apply quite consciously simply because it ties in so well with an element of the actual story.

STEALING INTO WINTER is available here in paperback, and here in ebook format (the sequel, EXILE AND PILGRIM, is available for pre-order). You can follow the author on Twitter @graemeKtalboys and at http://www.graemektalboys.me.uk/