PUBLICATION DAY: THE TAMULI BY DAVID EDDINGS, REISSUED IN A BRAND NEW LIVERY

Following the reissue of The Elenium Trilogy earlier this year, we are proud to announce that today marks the re-release of David Eddings’ classic Tamuli Series, in a brand new livery.

David Eddings was one of the original masters of epic fantasy. During a writing career that spanned more than three decades, David and his wife Leigh co-authored over thirty bestselling novels and created some of the world’s most loved characters. The Belgariad, The Malloreon, The Elenium and The Tamuli Series are among their most famous work.

Eddings has had worldwide success, and remained a huge-selling author consistently since first publication, so Voyager is introducing his work to a whole new set of fans in these fresh new designs.

The Tamuli Series follows on from The Elenium Trilogy, telling the tale of Pandion knight, Sparhawk, who, after saving Queen Ehlana and defeating the evil god Azash, is left to enjoy the hard-won peace of his kingdom. But peace is fragile and easily broken.
From the east, whispers of horrific armies being raised from the dead surface. Tales of ancient warriors and dreadful monsters who are tearing the kingdom apart. 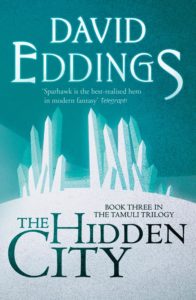 Seeing the threat this poses to their kingdom and people, Ehlana and Sparhawk set out with a retinue to Matherion, the Tamuli capital. Little do they know that the enemy is already within the gates of fire-domed Matherion awaiting their arrival . . .

If you love epic fantasy, try David Eddings’ Tamuli Series, click here to order Domes of Fire, The Shining Ones, and The Hidden City. If you haven’t read the preceding books first, to catch up on the story, you can click here and order the brilliant reissues of The Elenium Trilogy: The Diamond Throne, The Ruby Knight and The Sapphire Rose .

This article is part of the exciting Voyager blog series Backlist to the Future, featuring a regular slot on the latest new backlist launches from Voyager. Watch this space for more to come!