I read Assassin’s Apprentice many years ago (before I worked at Voyager!) and I know that for me, alongside Lord of the Rings, it was Robin’s books that really started my love affair with fantasy novels. When I came to HarperCollins I was hugely excited about the prospect of working with Robin. And when I got to meet her while she was in the UK it was easy to see how she could write such wonderful books. I love Robin and I love her books – and I know whoever I recommend her to will feel the same. 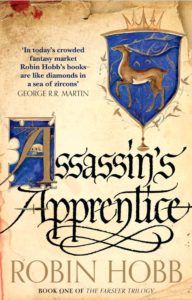 But, don’t just take my word for it. In preparing to write this post I did a little research.  What were other people saying about Robin and Assassin’s Apprentice? Well five minutes on Google revealed that I am far from alone! Readers and writers around the world feel exactly the same way:

The Sunday Telegraph says that: ‘Groping for comparisons [to Robin Hobb], you find yourself in the company of the great compendious literary novelists’.

Fantasy God, George R.R. Martin, thinks Robin writes ‘Fantasy as it ought to be written’.

The Times says her ‘novels as addictive as morphine’.

And if that wasn’t enough, Assassin’s Apprentice has over 35,000 five star ratings on Goodreads!

Surely proof that we at Voyager aren’t biased, we just have excellent taste!

And while you can find hours of entertainment and enjoyment in a book, there really is nothing better than sharing a book you love with someone else, and finding they love it too.  So if you’ve already read Assassin’s Apprentice why not sign up as a giver and introduce some new readers to Fitz and his world? If you’ve yet to have the pleasure, 23rd April might just be your lucky night!