In memory of ‘Crash’, by Beatrice and Fay Ballard – #BFIVoyager 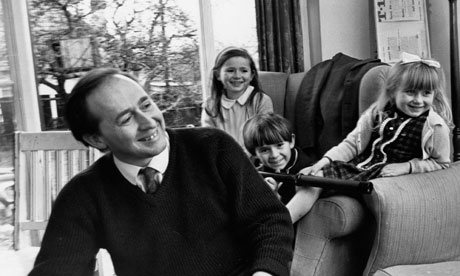 To celebrate the re-publication of J.G. Ballard’s ‘Crash‘ with a new introduction from Zadie Smith, 4th Estate asked Beatrice and Fay, the author’s daughters, to collect their memories of their father at the time he was writing the novel. They replied with two equally touching pieces. Thank you, Beatrice and Fay, for sharing with us memories of Ballard that we’d never have known.

‘I was heavily pregnant with my daughter when I read ‘Crash’, sitting on a bench one morning on Hampstead Heath. I’d been reluctant to open the novel for years knowing there’d be lots of sex and violence. The writer was my father. Surely I was crossing a boundary? Of course, he was using the imagery of sex and violence to explore a serious concern. So that made it okay… just about.

I recognized his cool, forensic writing, perhaps influenced by those cadaver dissections he made at Cambridge studying medicine. His young imagination was fed a diet of violence witnessed growing up in 1930s Shanghai; acute poverty claimed the lives of the Chinese, and Japanese soldiers tortured and killed their victims. A different kind of violence returned when pneumonia killed my mother in 1964 when she was 34 years old, leaving three small children and my father to drive back from Spain to Shepperton in a state of trauma.

My father was driven around in a chauffeur-driven family car, an American Buick, when he lived in Shanghai. He owned a couple of old Armstrong Siddeleys when we were small, and then a  majestic silver Ford Zephyr Six, followed by Ford Granadas which could be purchased easily from local dealers in Shepperton or Walton upon Thames; he liked Fords and he liked them big. In 1965, we drove to Greece with cases of Johnnie Walker whiskey stored under our legs in the back seat of the car.

In the sixties and seventies, Daddy was close to Eduardo Paolozzi, Dr Christopher Evans, Martin Bax and Michael Moorcock. It was a time of radical change, and his groundbreaking work, ‘The Atrocity Exhibition’, was published in 1970. I liked to wander into his study and pick out books about car crash victims from the bookshelf. Snuggled up on his comfy orange sofa, I’d turn the pages, fascinated by distorted faces and mangled bodies. Then, he believed a car accident was the only real experience of violence facing most of us.

In 1970, he held an exhibition of three crashed cars including a Pontiac at the New Arts Laboratory in London and employed a topless woman to film the opening. Fuelled by alcohol, guests splashed wine over the cars, broke windows and assaulted the woman. During the show’s run, the cars were attacked by visitors. Daddy was exploring the unconscious links between sex and the car crash. Encouraged by this response, he began working on his novel ‘Crash’.

I loved the familiar sound of the typewriter keys coming from his study. He’d drive us to school, help with homework, make tea and watch ‘Blue Peter’ and ‘Top of the Pops’ with us before bedtime. There was a reassuring domestic routine to the day. We’d do the supermarket shop in Shepperton on Saturday morning and walk to the Splash on Sundays to catch sticklebacks and watch drivers get stuck in the ford.

Two weeks after ‘Crash’ was completed, I returned from school to find him in bed nursing a headache. He’d had a front-wheel blow-out near Chiswick Bridge, and his Zephyr had crossed the central reservation area and overturned.

In 1970, Jim, Bea and I plus the golden retriever, Polly (named Apollo after the space missions and the Sun God) accompanied Daddy to make a short film in West London with the actor Gabrielle Drake. He was filmed driving a car around a car park. Called ‘Crash!’ by Harley Cokeliss, it was inspired by the short story ‘Crash!’ in ‘The Atrocity Exhibition’. Watch it if you can and wonder at his great sideburns!’ – Fay Ballard, June 2014

‘So many of the events and developments that have taken place in twentieth and twenty first century society were predicted by my father in his novels and short stories – too many here to mention – from global warming and pollution, to the explosion of the mass media, and its enormous impact and alienating effects. As a television producer myself, I often discussed the media with him – in all its forms. Back in 1987 – nearly 30 years ago – he predicted that “in the future each one of us would become actor, writer and director of our own television show, with our friends and family as the supporting characters.” From You Tube, to social media platforms like Facebook, his words have come true. We manipulate the images and personas that we want the world to see.

I was always eager and fascinated to discuss everything that was going on in contemporary society with him – from politics to culture – as I knew that he would already have worked out how we got there, and where we were heading next. Although a deeply moral and principled man himself, and the kindest father, he was never afraid to explore what we are capable of – even if this meant confronting difficult subjects and ideas. As I write this, Zadie Smith’s introduction to Crash is about to be published, and she writes so well about what an amazing book it is, and about her admiration for my father’s work.But at the time my father wrote “Crash”(published 1973), the themes it explored were too difficult to confront for some:  a publisher’s reader report described the author of “Crash” as “being beyond psychiatric help”. Of course my father took this as a mark of “total artistic success”!

I’m thrilled and excited about the new re-issues of all my father’s novels and short stories – five years after his death it is a wonderful and timely project for 4th Estate and HarperCollins to be doing. The wide and eclectic range of writers and authors who have written the introductions is testament to my father’s enduring brilliance as a writer, and to the power of his novels. So many of these introducers are highly talented and original authors themselves, so it is wonderful to have their individual takes on each work.

It was a bold and exciting idea to invite the artist Stanley Donwood to design the covers, and they look fantastic – with their vibrant colours and abstract designs – each one very different. They are like nothing else you will see in the bookstore – not unlike my father’s writing – truly unique. This link is also a reminder of the amazing influence my father’s writing had on artists across so many fields – from musicians, to painters, to film makers, and of course other authors.

When my father died in 2009 and I inherited his literary estate along with my sister Fay – it was an enormous honour and privilege to find myself becoming his literary executor. It was daunting too, as I am aware that it is a huge responsibility to safeguard his extraordinary canon of work, for both current and future generations to come.  On a personal level, it has been wonderful as it is a way of keeping his memory alive every day. When he was alive I spoke with him about so many of the themes and ideas that have informed his fiction, and it is wonderful now to carry on that conversation.

There are already huge numbers of Ballard readers and fans, both in the UK and worldwide, and there are many others growing up who are coming to his writing for the first time – like my teenage daughters Pandora and Alice.

Like existing Ballard readers and fans, they are discovering something very exciting. Not only are these masterful literary novels and short stories, which explore the human condition so brilliantly, but also, as has been pointed out often, my father’s writing is so visionary and prescient. It’s a way that we can learn about ourselves, and how our world is developing – and most tantalizingly – where our future might take us – both good and bad.  I remember my father once said that he was like a man standing by the side of the road holding a sign which read: “Watch out, dangerous bends ahead”. What further bends in the road ahead do we have to come? How will we navigate those bends, will we end up careering off into the side of the road and crashing? By reading his work we can find out.

I would like to thank and pay tribute to Claire Walsh – my father’s partner of over 40 years. Claire knew both the man and the writer intimately, and has an exceptionally sharp appreciation of his work, and of its history. I find her wise counsel of enormous help.’ – Beatrice Ballard, June 2014