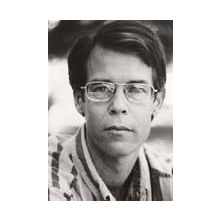 I wrote a novel set 32,000 years ago in the south of France, describing the lives of the people who painted the Chauvet Cave.

What sparked your love of Sci-Fi?

I grew up in southern California during years when it rapidly changed from an agricultural plain to a mega-city.  When I ran into science fiction, it struck me as a kind of realism.  It was the best literature for expressing my life.

2001 a Space Odyssey—  so peculiar and slow, spacey and cosmic.

Mr. Tagomi from Philip K. Dick’s The Man In the High Castle.

Is there a Sci-Fi book you’d like to see made into a film?

Many.  Maybe start with Joanna Russ’s The Female Man.

I’d like to live on an Earth that people were taking care of properly.

Start with Ursula Le Guin’s The Left Hand of Darkness.  Then Delany’s Dhalgren, then Gene Wolfe’s The Book of the Long Sun.  Lem’s Solaris, Disch’s Camp Concentration.  Philip K. Dick’s The Man In the High Castle.  Olaf Stapledon’s Starmaker.  These will give a new reader many ideas for more.