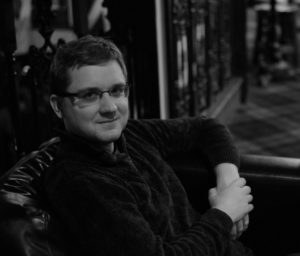 As well as being an amateur writer for as long as I can remember, I’ve also worked in the games industry and written content for a major online game. I like character-driven space opera and hard science fiction.

My first novel, Belt Three, is due to be published in summer 2015 by HarperVoyager. Three hundred years after the Earth was destroyed by alien Worldbreakers, a remnant of humanity ekes out an existence in the debris. The main character is a lower-class clone who is masquerading as a member of the naturally-born ruling class – until a space pirate kidnaps him, kills his ship’s crew, and forces him to help her on her obsessive campaign against the Worldbreakers.

What sparked your love of Sci-Fi?

I think it was Return of the Jedi. I saw it at a young age without any knowledge of the previous Star Wars films, so I couldn’t follow the plot, but attempting to make sense of the images fired up my imagination.

Aliens, for its masterful handling of tension; 2001: A Space Odyssey and Gravity, both for making space travel look real by the standards of their day.

As a novelist I’d like to say books, and it is books that I find most intellectually stimulating, but it’s films that provide the images that stick with me and that instantly come to my mind when I think of science fiction. Books influence me in a cerebral way, but films inspire me.

Breq from Ancillary Justice by Ann Leckie. Reading one character with multiple bodies in multiple places at once was thrilling.

Either, depending on the context. Science Fiction when being formal, Sci-Fi when trying to save space.

Is there a Sci-Fi book you’d like to see made into a film?

Cities in Flight by James Blish, because the flying cities could be really impressive when seen on-screen.

Robots, as imagined by Golden Age science fiction in which robots did all the work and humans lived lives of leisure with all their needs provided for.

Read and watch widely. Sample the whole history of the genre, not just the present day or whatever period first got you interested. Read authors you haven’t read before. Read books and authors that other authors cite as being influential on them. I’d hesitate to name any particular works as essential, because I’m still exploring the genre and I find a new essential book every few weeks.

Video games inspire me in the same way that films and books do, by giving me new stories to think about. Art, especially fantasy art, inspires me to think about what the story behind the picture might be. Music inspires me in a different way: it doesn’t give me ideas as such, but there are parts of my book that I strongly associate with particular pieces of music.

Are you on social media?

Yes: I have a blog at johnayliff.com, I’m on Twitter at @johnayliff, and my Facebook page is www.facebook.com/john.ayliff.

Jon’s first novel, Belt Three will be available to purchase following publication by HarperVoyager in summer 2015.

Five years ago I sat down and started writing a scene of violence. Men in the desert. Heat. Sunlight. Battle. A hero with a terrible flaw in him. A story emerged, fully formed, pouring itself out of me, a whole world and its history there in my head, love and… Read More